Buddy Guy is the greatest living exponent of classic Chicago electric blues. He is a thrillingly inventive guitarist, a passionately soulful singer, and a peerless showman. In the course of a 45-year professional career, he has sold over two million albums; earned four Grammy Awards; and won nineteen W.C. Handy Blues Awards-more than any other single artist.

In 2001, Buddy Guy released Sweet Tea-one of the most sonically innovative and critically acclaimed albums of his career. On that disc, Buddy offered exciting new interpretations of songs originally recorded by such blues primitives of the North Mississippi hill country as Robert Cage, T-Model Ford, and Junior Kimbrough. Working with producer Dennis Herring at Sweet Tea Studio in Oxford, Mississippi, Buddy stripped away the horn sections, keyboards, and guest vocalists of his Nineties recordings to create a fierce, stripped-down sound. The music of Sweet Tea evoked "a world full of temptation and cruelty" (Rolling Stone) and resulted in "the guitarist's best album since his 1991 breakthrough, Damn Right, I've Got The Blues" (Guitar World). It also earned a Grammy nomination for Best Contemporary Blues Album.

Buddy has recorded in the acoustic mode before, most famously with the late Junior Wells on Buddy and the Juniors (1970) and Last Time Around - Live at Legends (1989). But these were loosely organized jams that relied on familiar blues standards. Blues Singer, on the other hand, is a carefully selected set of songs that Buddy has never recorded previously-including "Hard Time Killing Floor" (Skip James), "Louise McGhee" (Son House), "Can't See Baby" (Jack Owens), "Moanin' and Groanin'" (Johnny Shines), and "Lucy Mae Blues" (Frankie Lee Sims).

The aesthetic model for Blues Singer is an album recorded in September 1963 by the late great Muddy Waters-with 27 year-old Buddy Guy on second guitar. Muddy Waters, Folk Singer is a captivating all-acoustic set of pure Delta blues that Chess Records made to capitalize on the emerging folk-blues boom ignited by the success of Bob Dylan, Dave Van Ronk, and Tom Rush, to name a few. Today, the inclusion of Muddy's "I Live the Life I Love" on Blues Singer comprises a loving tribute to one of Buddy Guy's greatest blues idols and teachers.

"That was when the white kids was just beginning to listen to blues," Buddy recalls. "And Leonard Chess had found out that he could sell this kind of stuff through the colleges. Lightnin' Hopkins, John Lee Hooker-they was switchin' to the acoustic to play these colleges.

"Leonard Chess calls up Muddy Waters and says, 'I want you to take a trip to Mississippi and find me some of these old guys who know how to play this shit. We got to rush this album out!' So Muddy calls me early in the morning-'cause Chess sessions was always held in the daytime-and says, "motherf***er, I want you to come down here and play acoustic on this album we gonna make."
"I said, 'but we haven't rehearsed.' And he said, 'I don't want no rehearsal-just me and you and Willie Dixon (bass).'

"When we got to the studio, man, Leonard and Muddy start cursing each other out. 'Motherf***er, I told you I wanted somebody who could play this old shit!'-see, Leonard didn't think Muddy could do this. He had wanted him to go down South and scout out some of the older guys.

"Well, we start playing and after about 45 minutes, Leonard Chess is standing there with his mouth open. Says, 'motherf***er, how'd you learn to play like that?' I said, 'I don't know what I'm doing myself, man. I'm just doin' what Muddy asked me.' I think I played one of Muddy's guitars-I didn't even have an acoustic guitar then, just my one brown Strat [Fender Stratocaster]. I used to sleep with that damn thing."

For the Blues Singer sessions, Buddy Guy (acoustic guitar, vocals) is joined on selected tracks by some equally legendary friends.

George "Buddy" Guy was born July 30, 1936 in Lettsworth, Louisiana. "I was so far out in the country, man. We didn't have running water, no electric lights, no radio, and I didn't know nothing about no electric guitar. We used to get the catalogs, like from Sears, and that's how our mother would order our clothes. Didn't have no stores there to buy clothes from."

Today, Buddy Guy is an internationally celebrated symbol of the living blues. The owner of the Chicago club Buddy Guy's Legends, he continues to tour the world with his dynamic live show. On February 7, 2003 at New York's Radio City Music Hall, Buddy Guy broke up the house in a gala "Salute to the Blues." This all-star show included B.B. King, Macy Gray, Alison Krauss, the Neville Brothers, and Aerosmith, among other artists-but "the evening seemed to belong to Buddy Guy," according to Billboard. "The night's leading figure was Buddy Guy," wrote The New York Daily News while The New York Post proclaimed "it was Buddy Guy who stole the show."

"It's the blues that keeps you young," Buddy once told Guitar Player magazine. "When you stretch that string, you're stretchin' your life." 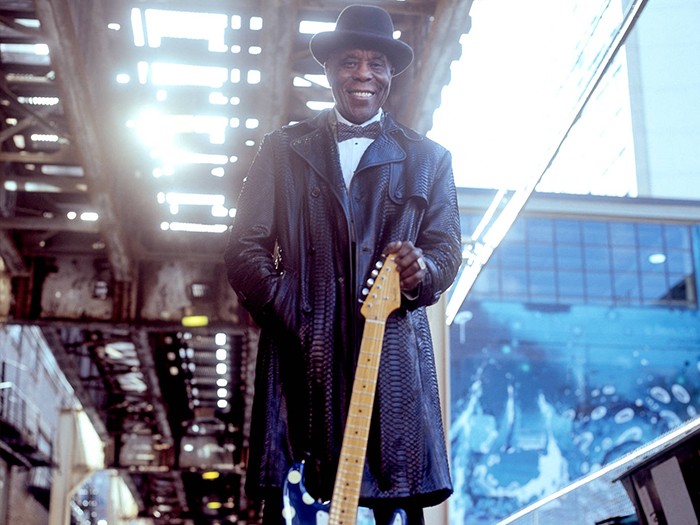 The Blues Is Alive and Well